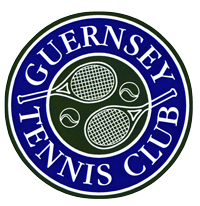 Andy started his coaching career when he was appointed as the Head Tennis Professional at Lee On Solent Tennis Club in Hampshire in 1985.

While at Lee on Solent he was part of the successful team that won the Puma cup at Wimbledon as well as being a regular member of the Hampshire County Team.

Then he worked a couple of winter seasons coaching in Abu Dhabi.

In 1987 as well as being appointed Head Tennis Professional at The Surrey Tennis & Country Club he coached Chris Wilkinson who became British No1 .

His other clients included Ronnie Corbet and Adam Faith.

In 1989 he did a summer season with the multi Grand slam winner Roy Emerson in Gstaad Switzerland.

In 1994 he returned to Hampshire as the Head Tennis Professional at Alverstoke Tennis Club where he enjoyed 5 years .

In 1999 he came over to Guernsey and has been apart of the Guernsey Team which reached the National division of club league.

© 2022 Guernsey Tennis Club website by AB Design Guernsey
You can login using your social profile
Install social plugin that has it's own SHORTCODE and add it to Theme Options - Socials - 'Login via Social network' field. We recommend: Wordpress Social Login